Dr. Tomomi Yamaguchi and Satoko Oka Norimatsu, “The “History Wars” and the “Comfort Woman” Issue: Revisionism and the Right-wing in Contemporary Japan, U.S., and Canada” 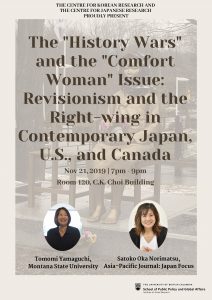 An issue of intense controversy currently in Japan is “comfort women”, with many in the right wing relentlessly attacking the accepted historical narrative and denying that there was any government involvement in, or corresponding responsibility for, a system of sexual slavery. Right-wing media and intellectuals have begun to use the term “history wars” to refer to this development. They have criticized the “comfort woman” monuments, resolutions, museum exhibits, and coverage of “comfort women” in history textbooks and curriculums in the U.S.. In particular, as “comfort woman” monuments and statues have been built in various locations in the world, including the U.S., during the last decade, they have become the target of attacks from the Japanese government and Japanese right-wingers. They consider the United States to be the major “battleground” on the “comfort woman” issue, as well as to the United Nations.

Based on Dr. Yamaguchi’s anthropological fieldwork on the Japanese right-wing activities in the U.S. and Japan, as well as the experiences of people involved in the making of the “comfort women” memorials in the U.S., Dr. Yamaguchi will demonstrate how this issue functions as an important rallying point to tie together disparate right-wing forces in and outside Japan. Dr. Yamaguchi will also highlight how the acts of remembering and commemorating the survivors’ experiences of wartime violence against women become such a contentious, political issue that mobilize the Japanese right-wing so intensively and emotionally both in Japan and the United States.

Following Dr. Yamaguchi’s talk, Satoko Oka Norimatsu, Yamaguchi’s fellow Asia-Pacific Journal: Japan Focus editor and a Vancouver-based author, will introduce “history wars” in Canada, in 2015 over the plan to build a “comfort women” statue in Burnaby, and in 2018 over the movement to establish a Nanjing Massacre Commemorative Day in Canada.