Home / Events / Dr. Kyong Yoon, “The Korean Diaspora in the Production and Consumption of Hallyu”

Dr. Kyong Yoon, “The Korean Diaspora in the Production and Consumption of Hallyu” 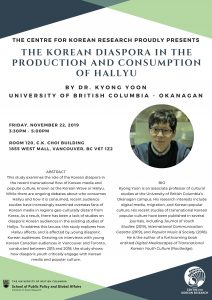 Kyong Yoon is an associate professor of cultural studies at the University of British Columbia’s Okanagan campus. His research interests include digital media, migration, and Korean popular culture. His recent studies of transnational Korean popular culture have been published in several journals, including Journal of Youth Studies (2019), International Communication Gazette (2019), and Popular Music & Society (2018). He is the author of a forthcoming book entitled Digital Mediascapes of Transnational Korean Youth Culture (Routledge).

This study examines the role of the Korean diaspora in the recent transnational flow of Korean media and popular culture, known as the Korean Wave or Hallyu. While there are ongoing debates about who consumes Hallyu and how it is consumed, recent audience studies have increasingly examined overseas fans of Korean media in regions geo-culturally distant from Korea. As a result, there has been a lack of studies on diasporic Korean audiences in the existing studies of Hallyu. To address this lacuna, this study explores how Hallyu affects, and is affected by, young diasporic Korean audiences. Drawing on interviews with young Korean Canadian audiences in Vancouver and Toronto, conducted between 2015 and 2018, the study shows how diasporic youth critically engage with Korean media and popular culture.