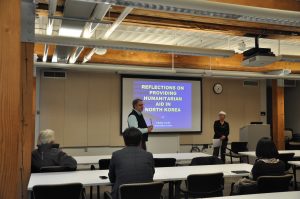 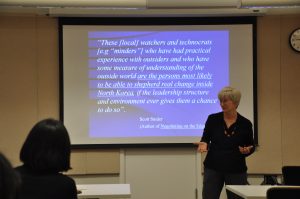 Christy Gavitt began her overseas career as a Peace Corps volunteer in South Korea from 1974-76, followed by a year-long internship with CARE-Korea. She then worked overseas in international relief and development programs for 32 years, 19 of those years with CARE-USA.  Her assignments included emergency programs in Pakistan, Somalia, Chad, Mozambique, Somaliland, North Korea and Rwanda. From 2000, she managed HIV/AIDS and mother-child health programs in Mali, Togo, Namibia and Tanzania.

After returning to the US, she worked for over five years as the Senior Health Coordinator with the American Red Cross in Washington DC.  She is currently a global health consultant.

Increasingly, international and domestic aid workers provide humanitarian aid in countries with authoritarian governments. One of the many dilemmas is ensuring that the most vulnerable receive the allocated aid while concurrently liaising and coordinating with national and local government entities who often don’t prioritize the needs of their at-risk populations. Despite these obstacles, aid organizations should make every effort to ensure that they can be physically present in the country over the life of the project. The potential benefits to be gained by both the aid organization and the population that aid workers come in contact with can potentially exceed the obstacles and frustrations experienced by the NGO. During a six-month period in 1998 and 1999, the presenter was employed by the Private Voluntary Organization for North Korea, a consortium of five US non-governmental relief agencies. Along with six other colleagues, she carried out project assessments and the subsequent monitoring of the distribution of 150,000 MT of US Government-contributed maize and wheat through 152 food-for-work projects in seven provinces in North Korea.  The projects focused on the repair of embankments that had been damaged by the previous years’ floods.  This job entailed repeated contact with as many as 300 North Korean senior counterpart officials.  Ms. Gavitt was one of the three Korean speakers on the team.