“Hope for the Future of Youth in Asia by CJR” 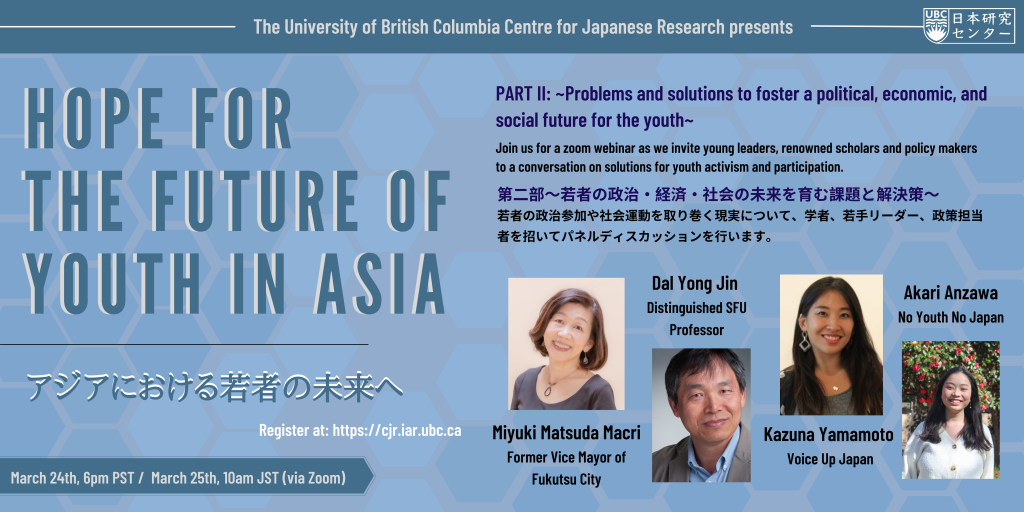 With the rise of the ageing population in East Asian countries, many have come to question the role that young generations will come to play in the next few years. It is without doubt that frustrations amongst the youth have increased from the rise in cost of living to policies catered towards the eldery. The Centre for Japanese Research at the University of British Columbia invites you to a webinar series focused on sparking conversations amongst the young leaders of tomorrow.

This will set the stage for further discussion by providing an open platform for university students in Asia and Canada to contribute to talks regarding their own personal experiences and opinions on youth participation in politics, youth activism in social justice movements and how education plays into nurturing the youth. Any university students located in Asia or North America are invited to this open discussion.

Part II ~Problems and solutions to foster a political, economic, and social future for the youth~

This will delve more into the specifics by inviting scholars, young leaders and policy makers to discuss the realities surrounding youth participation in politics and social movements in a panel discussion.

As a strategy and organizational development consultant, Miyuki has facilitated reinvention of corporations, national/local governments, NPOs, hospitals and universities in Japan. She joined Fukuoka Directive Council, Japan’s most successful Public Private Partnership, which has led Metro Fukuoka’s Global Competitive Strategy including attracting diverse talent to the region. She played an instrumental role to enhance women’s networks in many layers and empowered women leaders, while serving as Executive Director of Fukuoka Prefecture Gender Equality Center, Member of Council for Gender Equality Japanese Cabinet Office and Executive Advisor to the President of Fukuoka Women’s University. She currently resides in New Westminster, BC, Canada.

Born in Japan, Akari moved to New Zealand with his family after the Great East Japan Earthquake.
After moving to New Zealand and attending school there, she became interested in social issues and politics. She joined NO YOUTH NO JAPAN in June 2020 with the vision of “participatory democracy as a culture”.
Currently, she is a member of NO YOUTH NO JAPAN, focusing on planning online events.

Dal Yong Jin is a Distinguished SFU Professor, and his major research and teaching interests are on transnational cultural studies (Korean Wave), digital platforms and digital games, globalization and media, and the political economy of media and culture. Jin has published numerous books, journal articles, and book chapters, including Korea’s Online Gaming Empire (2010), New Korean Wave: transnational cultural power in the age of social media (2016), and Smartland Korea: mobile communication, culture and society (2017). He is the founding book series editor of Routledge Research in Digital Media and Culture in Asia, and he has been directing The Transnational Culture and Digital Technology Lab since summer 2021.