CKR-CJR Conference “Multiculturalism and Migration in Trans-Border Asia: Japan, Korea, and the Philippines” 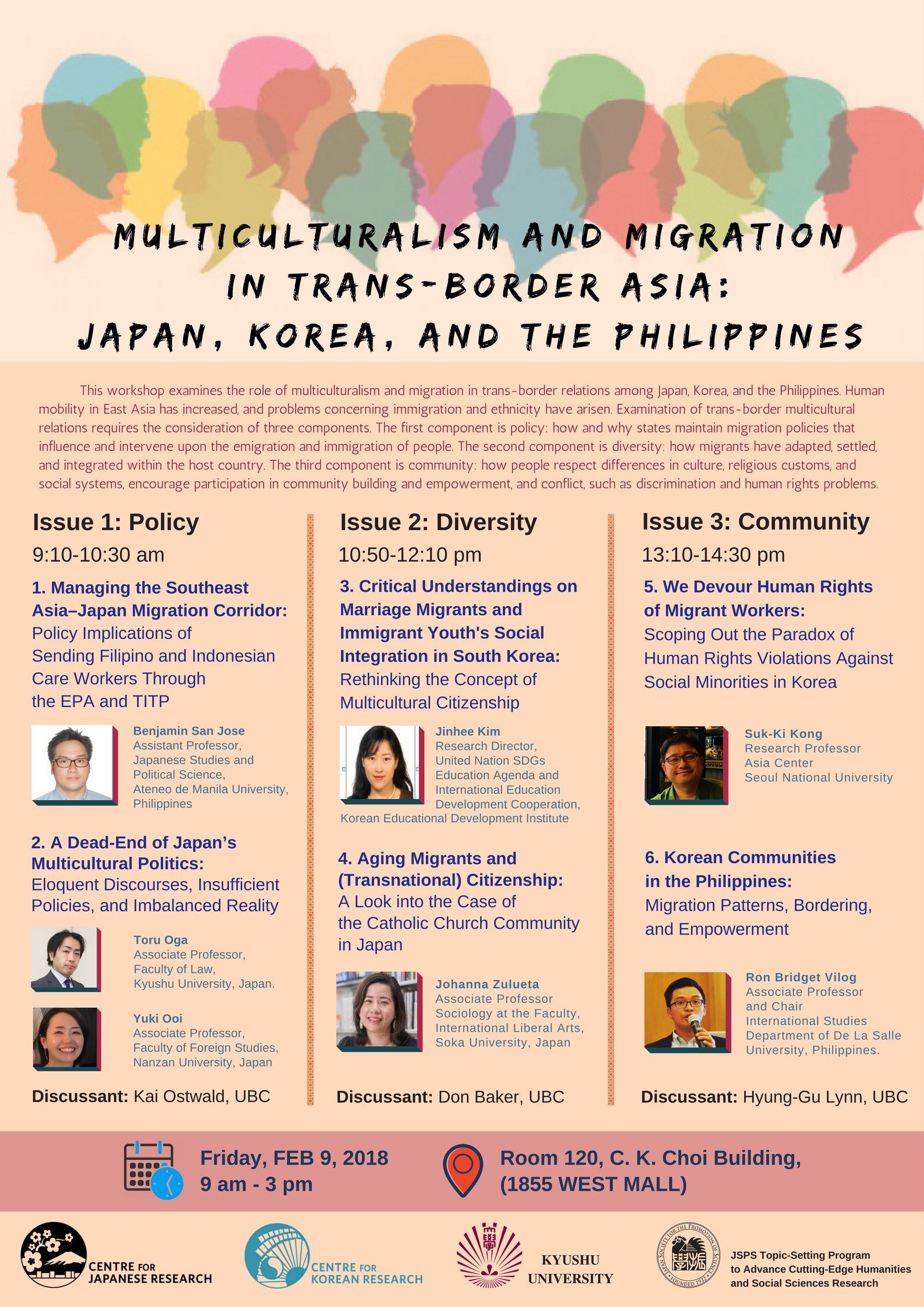 This workshop examines the role of multiculturalism and migration in trans-border relations among Japan, Korea, and the Philippines. Human mobility in East Asia has increased, and problems concerning immigration and ethnicity have arisen. Examination of trans-border multicultural relations requires the consideration of three components. The first component is policy: how and why states maintain migration policies that influence and intervene upon the emigration and immigration of people. The second component is diversity: how migrants have adapted, settled, and integrated within the host country. The third component is community: how people respect differences in culture, religious customs, and social systems, encourage participation in community building and empowerment, and conflict, such as discrimination and human rights problems.

Japan began to receive care workers through its EPAs and recently through the Technical Internship Training Program (TITP). Focusing on the role of recruitment agencies and brokers, this study argues that the migration industry views the inclusion of care workers in the TITP. It is through the discourse of “managing” the healthcare migration corridor that brokers and bureaucracies present a veneer of protection and the promise of technology transfer even as it maintains the facade of Japanese ethnic homogeneity.

Japan has traditionally maintained a closed immigration policy that prevents unskilled laborers from settling. However, the Japanese government has actively formulated various discourses on multiculturalism. Local governments in Japan have initiated numerous multicultural efforts. This paper examines and compares the policy and discursive practices of an unbalanced and contradictory multiculturalist ideology in Japan.

Although the Korean government has been aggressively implementing a multicultural integration policy since 2006, it is hard to deny the growing anti-multicultural sentiment and racism against marriage migrants and immigrant youths in schools and communities and on the street. This paper will examine both the formal and informal dimensions of the challenges and issues of migration and social integration.

Despite such fascinating discourses as the migrant era, multicultural society, and global citizens, Korean society is faced with serious human rights violations taking place in rural areas, where migrant workers are treated as modern slaves. This paper explores why and how political, economic, and socio-cultural obstacles hinder local farmers from socializing human rights.

This paper examines how Korean communities exhibit ethnic bordering in a transnational space and explores the migration dynamics and patterns of Koreans who have been residing in the Philippines. It examines the mechanisms of clustering and their strategies of migrant empowerment.

Benjamin San Jose is Assistant Professor of Japanese Studies and Political Science at the Ateneo de Manila University, Philippines. He completed his doctorate degree in International Public Policy at the University of Tsukuba, Japan. His research interests include the political economy of Philippine migration and he is currently doing research on the role of the migration industry in managing the Philippine–Japan migration corridor.

Toru Oga is Associate Professor of Faculty of Law at Kyushu University, Japan. He completed his Ph.D. in Ideology and Discourse Analysis at the University of Essex, United Kingdom. His research interests include international relations in East Asia, especially their impact of non-state and transnational actors, as well as policy and discourses on immigration and foreign residents in Japan and the internationalization of local communities.

Yuki Ooi is Associate Professor of Faculty of Foreign Studies at Nanzan University, Japan. She completed her Ph.D. in Sociology at Hitotsubashi University, Japan. Her special interests are in migration, in particular from Asia to the United States in the late nineteenth century, and cultural and political impacts of globalization of steamship networks on the United States and Japan.

Jinhee Kim is a research director for the United Nation SDGs education agenda and International Education Development Cooperation at the Korean Educational Development Institute. She completed her Ph.D. at the University of Surrey, United Kingdom. She has studied and researched in Canada (University of Toronto), Germany (Siegen University), Australia (University of Technology Sydney), and South Africa (University of Free State), and UNESCO Headquarters invited her to become a member of the EAG (expert advisory group) for Global Citizenship Education.

Johanna Zulueta is Associate Professor of Sociology at the Faculty of International Liberal Arts, Soka University, Japan. She completed her Ph.D. in Sociology at Hitotsubashi University, Japan. She is the author of numerous articles on Japan–Philippines migrations, primarily on military basing and migration in Okinawa. She is the editor of Thinking Beyond the State: Migration, Integration, and Citizenship in Japan and the Philippines (Manila: De La Salle University Publishing House, 2018).

Suk-Ki Kong is Research Professor in the Asia Center at Seoul National University. He studied sociology and completed both a B.A. and M.A. in the Department of Sociology at SNU. He received his Ph.D. from the Department of Sociology at Harvard University. His major fields of research are social movements, NGO studies, and political sociology. He currently works on two research projects, “Korean Citizen’s Engagement in Social Economy” and “Comparing Corporate Social Responsibility (CSR) Activities in Local Community between Korea and Japan.”